IAGB in collaboration with Shishu Bharti is excited to present a fun-filled, thoughtful , and educational insight into India’ s long journey from being a subjugated nation to a free nation, now in it’s 73rd year of Independence. There will be 6 sessions with prizes at the end of every session as well at the end of the classes. Please register at the link below to participate. All classes will be held on Zoom. Upon registration you will receive a Zoom ID and password to participate. Classes will begin on July 12th, Sunday from 10 am to 12 am. Registration is free. These classes are open to all Middle School and High School students. 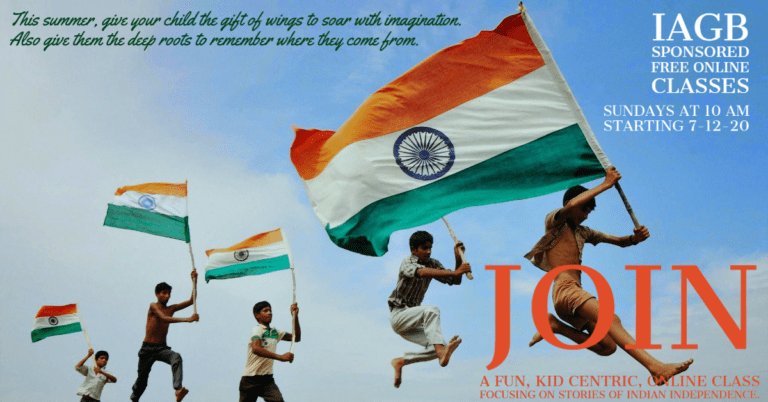 I do not look to history to absolve my country of the need to do things right today. Rather I seek to understand the wrongs of yesterday, both to grasp what has brought us to our present reality and to understand the past for itself.
Dr. Shashi Tharoor
“An Era of Darkness: The British Empire in India”

India gained its independence from the British on August 15th 1947, after almost two hundred years of British rule. The British East India Company came to India in the 17th century to trade with a rich and prosperous India, created an Empire that lasted for two centuries, and then left an exploited and impoverished nation.

The resistance to British rule had an extremely violent phase in 1857, called the “Sepoy Mutiny” or the “First War of Indian Independence”, which led to crushing defeat. It took a decades long nonviolent movement, finally led by one of the greatest human beings in history, Mahatma Gandhi, to gain independence.To further their rule, the British deepened religious divisions that led to a bloody partition into two countries at Independence. All Indians and those of Indian origin in the world are living with the legacy of this period.

In this six part virtual series course sponsored and promoted by the Indian Association of Greater Boston (IAGB), a group of passionate teachers from the Shishubharati School of Culture and Languages will explore this topic.

We will go through a timeline of the events through three centuries, describe the critical factors and important personalities at play; using a book list, Youtube videos and voluntary quizzes to supplement and illustrate the lessons.

Prizes will be given for participation through the course, and at the end.