With COVID 19 restrictions lifted off, we are very excited to bring back in-person India Day 2021 celebrations. It will be on August 15th from 3 to 7 pm at the Hatch Shell, the iconic Boston landmark that unites and enriches the Boston community with vital arts, culture, and sprawling open space on the bank of Charles River.

The Berklee Indian Ensemble is one of the hippest performance acts to emerge from Boston. A global viral sensation with over 230 million views, the Ensemble melds classical, folk, Sufi, and contemporary Indian music, with influences ranging from hip-hop and jazz to Middle Eastern and African flavors.
Founded in 2011 by Indian Berklee alumna and faculty member Annette Philip, the Ensemble provides an open and inclusive creative space for musicians from all over the world to explore, study, interpret, and create music influenced by the rich and varied mosaic that is Indian music today. The Berklee Indian Ensemble has risen to prominence as one of the most storied musical collectives in the country with their unmistakable signature sound, and legendary collaborations with A.R. Rahman, Ustad Zakir Hussain, Shreya Ghoshal, Shankar Mahadevan, Vijay Prakash, Indian Ocean, and Clinton Cerejo, to name a few.
After a year and a half in a pandemic that has affected lives in every corner of the globe this event, featuring the Berklee Indian Ensemble live in concert at the iconic Boston landmark, unites and enriches the Boston community is special in many ways. In addition to the celebration of India’s 75th Independence Day, it is also the 10th Anniversary of the Berklee Indian Ensemble and their first collaboration with IAGB. A clip of one of their performance can be viewed here: https://youtu.be/Ap5iqF4DOz4 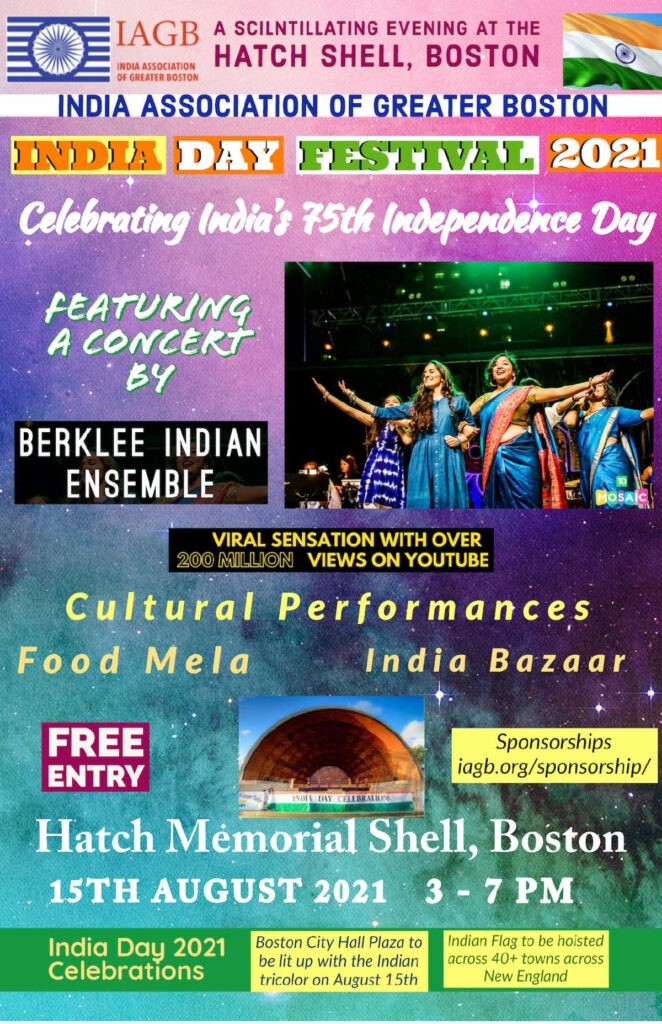 Flag Raising of US and India at 40+ towns across New England, Honoring India's 75th Independence

As a lead-up to India Day, IAGB will be hoisting flag-raising events in over 40 towns across New England, to raise the US and Indian flags to commemorate momentous India’s 75th Independence Day celebration. IAGB has worked very closely with the town/city administrations to bring these events to respective City/Town Hall and town commons and celebrate amongst the communities.
These events starting August 1st through the 15th will culminate into the grand finale at the Hatch Memorial Shell on August 15th.
Please visit the website for more details and the event schedule: https://www.iagb.org/flag-raising-2021/

Tri-color lighting on the City Hall Plaza building in Boston is scheduled for August 15th at dusk. Enjoy this beautiful scene and India’s pride right in the heart of Boston.

A limited number of booths at the India Day event (Hatch Shell) are still available. Do no miss the opportunity to advertise in our India Day Magazine that reaches thousands of IAGB community and via our social media platforms. For all the advertisement and sponsorship details please visit:
https://www.iagb.org/sponsorship/
Raising the flags of India and USA India Day 2021 Magazine