Don’t search for Heaven because it’s here in Leh! 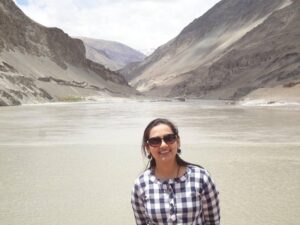 Nidhi exclaimed, “I felt…as if I was in heaven! The magical beauty of Leh-Ladakh will beckon you year after year and will leave you still wanting more!” Her words left me with sudden fascination towards this rustic and heavenly beautiful travel destination Leh. That’s all I needed to know, and I knew Leh will be an incredible vacation destination!

I was so eager to go that I went straight to my husband and said to him that our next vacation will be Leh, Ladakh. He was amused by my suggestion!

The best time to visit Leh is June to September. It’s very cold in the winter months. So we decided that June will be the most appropriate time. We carefully planned our itinerary and were so excited for this new adventure. Both me and my husband are trekkers at heart and enjoy trying out new adventurous destinations. This time with two young children it seemed slightly challenging, but who could stop us!!

We planned our 5-day long trip to Leh and trust me it was one of the beautiful and appropriate time to visit the place. We already had heard a lot about the beauty of Leh and our expectations were quite high, so we were all set to depart for Leh.

After we reached Leh, the feeling was one of its own kind. The airport was surrounded by mountains and we seemed like we were walking on clouds. There are some things which cannot be put in words, love is one of them and then there is Ladakh- the land of scenic beauty, rustic charm and nature at its best. Nevertheless, I will try to pen down my experience of Ladakh as best as I can, trying hard not to lose myself in those brilliant moments spent in the lap of the majestic Himalayas.

Leh & Ladakh, situated amidst the Great Himalayas and the Karakoram ranges in the scenic state of Jammu and Kashmir, are two of the most spectacular places in the world where scores of tourists from across the globe throng annually.

Once you reach Leh, it is advised to take rest for some time, as this will help your body to acclimatize to the climatic conditions. There is a relative lack of oxygen in this place being 3000 meters above sea level. Even though the magnetic beauty of this place will not let you rest. The only possible way out for all the curious and impatient people like me, who can’t resist themselves from exploring the place is that they check out some local attractions or can visit the local Leh market which I did, while my family rested in the hotel. The hotel staff were warm and so welcoming, they cooked us delicious home cooked delicacies at the lunch buffet.

Cellphones don’t work here and you will be glad they don’t! After acclimatizing ourselves with the place it was time to explore and discover the hidden gems of Leh which everyone talks about.

Our first stop was the Hall of Fame Museum. The splendid museum built by the Indian army, is definitely worth a visit. One section of the museum holds the immense memorabilia of the Kargil war. There were biographies of eminent defense personalities, weapons used in the war and enemy soldiers’ various belongings found at the war site. The other section of the museum was dedicated to Siachen war and its heroes, discover the attires, daily instruments and multi layered shoes of the soldiers kept on display.

Later in the day we stopped by few monasteries and the Shanti Stupa, an imposing, white-domed sacred shrine positioned on a hilltop at Changspa, was built by a Japanese Buddhist organization to honor 2500 years of Buddhism. Atop we enjoyed the stunning panoramic views of sunset at the Himalayas.

After a long tiring day, we spent the night listening to melodious Ladakhi (native Ladakh language) songs sung by our hotel staff.

Next day, early morning, we started for Nubra valley and the climate was just perfect. Just gazing at the mountains and admiring their beauty makes you feel so satisfied. The route to Nubra valley was extremely picturesque and mind blowing, however there were many steep curves and sharp turns that made us feel giddy.

We crossed Khardungala pass, which happens to be the highest motor-able pass in the world, nestled at an altitude of about slightly more than 18000 feet. The pass turns out to be a meeting place of almost all the bikers. Atop the journey we saw the confluence of the Indus and the Zanskar rivers, which is a rare sight. One can clearly differentiate between the two waters from a distance.

As we completed driving up to Khardungla, my son felt very nauseous. We had rented a tent at the Pangong Tso Lake. It got very cold at nighttime so the local people suggested we keep hot water bags on our feet to keep them warm. The night at the tent was fun and adventurous. In the morning  we had a nice time over cups of chai (tea), Maggi, the favorite noodles on the roadside camps where we chatted with good-hearted people.

After returning from the lake, the altitude sickness drastically reduced, and we felt much better.

The Magnetic hill was our last spot to visit. The hill has powerful magnetic properties that pulls cars uphill and forces aircrafts to increase their altitude to avoid magnetic interference It is actually an optical illusion caused by particular layout of the hills that makes a very little downhill slope to appear as uphill slope. Our car was literally driving itself towards the hill. The magnetic properties was pulling it towards itself.

To sum it all, our experience of Leh was an experience of a lifetime. It is not a very sought after destination but if you happen to end up there you will definitely find that as the best decision of your life.