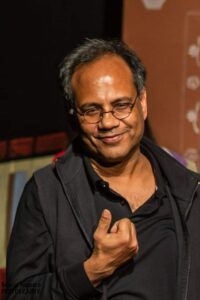 The pandemic has challenged human behavior and intelligence to no ends. After a year of being confined by the unknown, we all have discovered patterns and behavior in ourselves we did not know of. But yet humans have been creating intentional behavior patterns in machines for quite a few years now. As I was dwelling on this, I decided to talk to one such person whose tag line is “Creating artificial human behavior and intelligence”. If you know him, this line is overloaded. He not only creates it in machines but humans too.

This month’s spotlight is on Dr. Subrata Das, a scientist by profession and a theater director/playwright by passion. I had the rare opportunity to sit down and chat with Subrata Das about something beyond theater, costumes and acting.

Subrata Das hails from a village called Patuli, about 120 km from Kolkata, and has traveled through the continent of Europe and finally landed in the US. As soon as I mentioned his village, his face lit up and he shared stories of growing up as the youngest of 9 siblings, of his father who was an excellent soccer player and very well respected in his village, of his mother whose unconditional love makes him teary eyed every time he even talks about her, of his friendship with his sister who he lost at a young age. Subrata da says that imagination was his biggest tool since growing up he did not have much materialistic things at his disposal like most people who grew up in that time, and how math being all about imagination was his favorite subject. He was the top scorer in his high school when leaving, excelling in mathematics and then went to a university in Kolkata for his under graduation. In the 1980s, when computer science was still an upcoming field, he bagged one of the spots of 25 people in ISI Kolkata for MTech. In a few years, he was on his way to Britain to do his PhD, for which he had secured a very competitive scholarship. At this point I asked him if he was a genius or what and he shyly said “I have just had some successes in life”. After finishing his Post Doc at the Imperial college in London, he came to the US for work. That is how he ended up in the Boston area. He started his own company in 2011, which he eventually sold off and is now enjoying his scientific work, taught at Villanova, and now teaching at Northeastern and following his passion. In between I heard him mention writing some books, so I went and looked up his LinkedIn and found that he has authored five technical books! I feel Subrata Das gets 30 hours a day. Not fair!!!

But Dr. Das couldn’t stop at the professional successes. He always yearns for more and I say this from personal experience working with him in several plays, including portraying Sita in Ramayana and gender-bending role Paravasu in Karnad’s The Fire and The Rain. He told me that every person that grows up in Bengal has a natural affinity to the performing arts and he is no different. He experienced the stage from an actor’s perspective after acting for the first time in a “yatra” in his village at the age of 10. He continued that through his years in London. In 2003, he assembled the theater “avengers” and formed SETU. Since then SETU has produced numerous productions under the supervision of him and co-founder Jayanti Bandyopadhyay, and almost everyone in the New England community has been fortunate to witness at least one of the plays.  I asked him why and how did the theater bug become so big in his life that he became a founder of a community theater group. How did the “sangam” of Artificial Intelligence and Arts happen? That is when he told me how he started relating AI and cognitive science and theater. He drew an interesting parallel – “In AI, you create a robot, basically you are trying to create an artificial human. This is what you do in theater too. You choose a character and bring it to life. The structure of memory humans use for acting is similar to AI.” Subrata Das is a method actor and says that “an analytical mind does help you as an actor because you are more inclined to study a character in details. It is similar to the way you dissect a problem when you study a character. Breaking down a scene is similar to breaking down a problem.”

So, as I was chatting with Subrata da, I wondered who inspired this man. He has mentioned to me before that he is a fan of Ramanujan and Swami Vivekananda. He learned about Ramanujan in his school days and always drew a parallel with him given the passion for mathematics they both had, how his youth was structurally similar to that of this brilliant intuitive mathematician of all time who grew up in Kumbakonam, about 2200 km apart from where he grew up. Subrata da has given a talk on Ramanujan at the Central Square theater when he performed in that role. He read a lot about these two men and saw them in a very human light, after he learned about their weaknesses too. That is what inspires him more than saintly figures. “Now that I am exposed to the performing arts, I get inspired by a lot of actors, the ones that don’t care about money but use their power to do bigger things in the world.”

At this point I wanted to know more about both his worlds but decided to find out more about his company and future plans as a scientist. He simply told me “Making money isn’t my primary goal. I am now enjoying theater more and have started thinking of life in a different light. I enjoy science, academics, writing books and of course SETU, these things give me more satisfaction than money.” That is when I thought who am I to question such noble intentions?

Amongst all this, I realized he had carved time for some romance too. He told me his parents wanted him to marry before he went to Britain but fate had something else for him. He met Janique, who hails from the Burgundy region of France and was working as an au pair in Edinburgh, at a party, and took her phone number like the other 5 men who did the same. Little did he think he would actually strike gold. She agreed for a date and they watched the movie “Moonstruck”. All he wanted to do on his first date was kiss her but it did not happen until a few dates later. His love for Janique is unfaltering. “Janique is my rock. She is always there with a smile, never leaving my side. Without Janique, I am reduced to nothing.” I was curious how Janique reacts to his theater madness. He told me that she has taught him compassion, to never be jealous of someone else’s success, no gossip, just positive thinking. “I have learned to be impartial from Janique’s influence.”

Now I wanted to know more about his theater work. What was his favorite thing, least favorite thing and most challenging thing. “I like the entire production process including directing of course, but most favorite is being back stage and seeing the actors perform well. The ability to contribute to someone’s personal satisfaction is priceless. And obviously least favorite part is when any production is not well attended. It is my obligation to give every actor the right amount and kind of audience. As for the hardest part, getting audience is. Even professional theater groups struggle with this.”

I asked him about his vision for SETU and where he sees it in the next 5 years. “I definitely want to take two plays to New York and New Jersey for an off-Broadway style production. And I am confident it will happen and will be a success.” I was curious to know his thought process for choosing a play. He told me that he always strives to combine the pure art form with some popular stunts. “Sometimes a play on its own can become very intellectual, so I dilute it to make it more fun for masses. I like to take a middle ground.” His favorite productions of SETU are ‘Shahjahan”, “Devdas”, “Fire and Rain” and of course “Kamala”.

I was exhausted just hearing all this, so I wondered out loud how he made time for everything. “A supporting partner is key. And I work very hard. I exercise a lot and that pays off. I manage my time smartly, though not always successful. Work and family is always my priority. In my opinion, commitment is key.”

So what about post-pandemic world for theater? Subrata Das is confident that the theater world will go back to normal as we all have realized that virtual theater is not sustainable.

That brought me to my final question – How can the community help SETU?

“Come and watch our plays. That is the bottom-line. This is an appeal not only from me but from everyone in the performing arts business.”

Dr. Subrata Das lives in Belmont with his lovely wife Janique. He talked very fondly about his two grown up kids – Sebastien, who luckily gets his soccer skills from Subrata’s father and the French blood. Kabita, who is an artist and gets her name from Subrata’s late sister.

to learn more about SETU, its mission and upcoming productions.