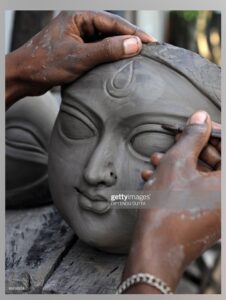 When the drumbeats were heard, the smell of sweet fragrance of Harsingar, or ‘Shiuli’ as we call it in Bengali, was in the air, open fields were surrounded by Kash phool (Kans grass) and my mind used to be overjoyed as all these used to bring the joyous message that – Durga Maa is coming home! That was around so many years ago… my growing up years in Calcutta or rather Kolkata! Durga Puja then was all about garnering a shot of freedom, of carefree behavior, every single year.

Nothing can compare to Durga Puja celebrations in Kolkata. The ‘City of Joy’ does not sleep, and its people enjoy the revelry to the hilt! Its five days of celebrations with themed pandals and traditional pujas, food, friendship and creativity. This part of the country seems illuminated from the sky as the city is bathed in lights. This is the way of life for Kolkata residents, and one must visit Kolkata during Puja to experience it firsthand.

Though the celebrations around Durga Puja last for over four days, mainly from Saptami to Dashami, the mood of the Durga Puja sets in much earlier in the life of the people of Bengal. It starts with the idol making at Kumartuli, a place famous for its beautiful clay idols of Gods and Goddesses and pottery. The entire process of creation of the idols or ‘murti’, as it is commonly known as from the collection of clay to the ornamentation, is a holy process and supervised by rites and other rituals.

Durga Puja evenings are incomplete if adults and kids do not take the floor to dance to the rhythmic beats of dhak and bells, holding earthen pots billowing a fragrant smoke. This impromptu dance is called ‘Dhunuchi naach’, a prominent custom and the most awaited activity after the evening Durga Aarti. Smoke, sound and rhythmic swaying creates an ambience which is purely intense and intoxicating! The Joie De Vivre seen in Kolkata during Puja days has been compared to the famous Carnival in Rio de Janeiro. The carnival spirit is more evident on the last day of Durga Puja (the day India celebrates Dussehra) when the idols are taken out in a procession for immersion in the river Ganges midst cacophony of Dhaak, dhunuchi naach and the chants of ‘Balo Durga mai ki jai’. The final day of celebration is incomplete without the famous ‘Sindoor Khela’, which has become such an important part of the cultural identity of Bengal.  Women draped in quintessential red and white saree apply sindoor to each other and offer sweets.

It has always been amazing to see how craftsmen shape the fantastic pandals (temporary marquees housing for Maa Durga and family) with bamboo, canvas and colored cloth; there is no construction, imaginary or real, that they cannot give shape to. Kolkata literally turns into a virtual walk-through gallery! The magnificent structures of the pandals and commendable artwork allows you to get a hint of Bengali tradition. These pandals justify why Durga Puja is a profligate affair in Kolkata! What is Durga Puja sans pandal hopping, right? Pandal hopping by night is a special attraction because of the massive illuminations. The vast canvas of the themes that are showcased in these pandals are just unparalleled and must have to be seen to be believed.

Colorful lights and elaborate lighting turns Kolkata into a fairy town at night during Durga Puja. In fact, what was earlier known as ‘Chandannagorer lighting’, the illumination executed by electricians from the district town, predates the trend of holding theme-based Puja. With the help of a rudimentary motor and a string of bulbs, these electricians used their indigenous technology to create magic through illumination. With advance technology, the illumination has gone up several notches and even if you are not quite religious, you might still venture out in the streets to see these ‘light’ paintings across the city.

Hopping from one pandal to another, by day or by night, does make you feel hungry. This is the time to check out the street food. A nibble here, a bite there and you are good to go! Two of the fastest moving foods on Kolkata streets are the ‘roll’ and ‘momo’. The roll, Kolkata’s equivalent of a ‘wrap’ or a ‘Frankie’ is essentially a paratha wrapped around a filling of cooked egg or chicken or mutton kebab, with some onion and green bell pepper, chopped chilies and a dash of lime, and an optional smearing of tomato ketchup or chili sauce. The momo, or the Tibetan version of the dumpling, has been Kolkata-ised too, with fillings of chicken and mutton replacing pork. Do not worry if you are a vegetarian, they have options to satisfy your cravings. Other popular items sold off the cart are dosas and a very ‘desi’ version of stir-fried noodles or ‘chow mein’. And of course, how can there be pandal hopping without a puchka refuel! At every corner, you will find the ubiquitous puchka-seller, the jhaalmuri-wala and bhel-wala. The ‘puchka’ is Bengal’s version of the ‘golgappa’ or the ‘panipuri’. And I must have to mention the famous Bengali desserts like Mishti Doi, Sondesh and Rassogolla’s sweeten the celebrations across the city.

A beautiful gathering of family and friends is another highlight of the Durga Puja fervor. Festivals bring people and families closer. Likewise, during Durga Puja, Bengali’s spend time with their near and dear ones through long adda(chat) sessions at various Puja Mandaps. I have been celebrating Durga puja with my family and friends in Boston for almost two decades now. Durga Puja in Boston may not match the grandeur of Kolkata, but it surely helps rekindle some of the nostalgic moments from my childhood days!

If you are planning to visit Kolkata, then Durga Puja is the perfect time to go there. The magnificence of this festival enthralls the visitors in a way that they love to come back to the city during puja festivities every year!

A glimpse of that World